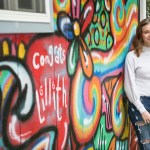 Mural slated to be painted at Albert Lea’s Academy Park