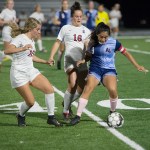 As the end of the regular season draws nearer, the Albert Lea girls’ soccer team hosted Rochester John Marshall in search of its third win of the season. After a scoreless first half filled with shot opportunities, the Tigers gave up one goal in the second half and were unable to score themselves, falling 1-0. […]