Home News An abundance of risk, not caution, before Trump’s diagnosis 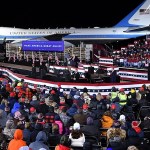 WASHINGTON — Standing well apart on the debate stage, President Donald Trump and his Democratic opponent Joe Biden looked out at an odd sight — one section of the room dutifully in masks, the other section flagrantly without. The mostly bare-faced contingent was made up of Trump’s VIP guests, who had flouted the rules by […]

The post An abundance of risk, not caution, before Trump’s diagnosis appeared first on Albert Lea Tribune.