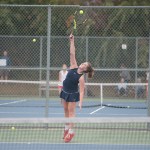 After a week away from the court, the Albert Lea girls’ tennis team hosted Austin Saturday morning hoping to get on the winning path.  Unfortunately for the Tigers, the Packers came in with a fury winning the meet 6-1, including two matches that went to three sets.  Freshman Rachel Doppelhammer was the lone Tiger to […]