Home News Rematches key to control of the Minnesota Legislature 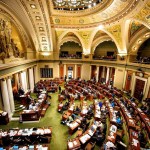 The contest for control of the Minnesota Legislature is underway, and several of the campaigns for House and Senate seats feature candidates who have run against each other in previous elections.

The post Rematches key to control of the Minnesota Legislature appeared first on Albert Lea Tribune.