Home News This Week in History: Man pleads not guilty to shooting his mother 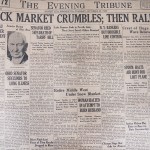 The post This Week in History: Man pleads not guilty to shooting his mother appeared first on Albert Lea Tribune.