Home News Wildfire’s effects felt as far away as Minnesota 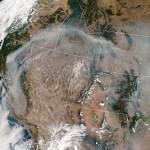 As the wildfires on the West Coast continue to wreak havoc, people as far away as Minnesota are seeing the effects in the form of muted skies and brilliant sunsets. But there is also a health component, even if it isn’t as dramatic as those living in those areas affected directly by the fires. Because […]

The post Wildfire’s effects felt as far away as Minnesota appeared first on Albert Lea Tribune.