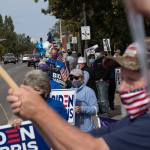 By Dan Kraker, Brian Bakst and John Enger, Minnesota Public Radio News On the same day that early voting begins in Minnesota, President Donald Trump and Democratic presidential nominee Joe Biden made campaign swings through the state. Trump held an airport hangar rally in Bemidji at 6 p.m. Biden, who is leading in most Minnesota polls, arrived in […]