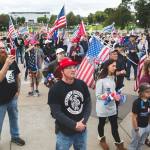 More than 100 people rallied outside the Minnesota Capitol in St. Paul on Saturday in support of President Trump, and against statewide pandemic policies they say are infringing on personal freedoms and damaging the economy. The “United We Stand & Patriots March 2020” event was organized by a group called the Minnesota Patriot Alliance. Among […]