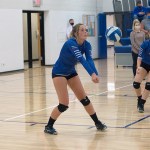 NORTHWOOD — The Northwood-Kensett volleyball team hosted a struggling Rockford team Tuesday night looking for its third win of the season. Despite a close third set that came down to the very end, the Vikings had little trouble with the Warriors, winning in three straight sets 25-20, 25-11, 28-26. The Vikings jumped out to a […]