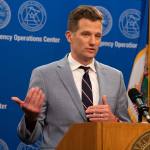 ST. PAUL — This isn’t the job he expected. When Steve Grove became Minnesota’s state economic czar early last year, he inherited an economy with near-record-low unemployment and a bustling business scene. He envisioned leading a state mission to become a national leader in economic innovation. The former Google executive, a Minnesota native, got off […]

The post Jobs czar strives to get Minnesota economy back on track appeared first on Albert Lea Tribune.