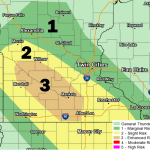 The National Weather Service is forecasting thunderstorms tonight that could be capable of producing large hail and damaging winds. The weather agency states the greatest risk of severe weather is anticipated to be along the Minnesota River Valley from west central into south central Minnesota. In areas where the threat is largest, hailstones could be […]