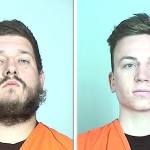 A Minnesota man and a man from North Carolina are accused of trying to conspire with an international terrorist organization. Michael Solomon, 30, of New Brighton is facing one federal criminal charge for conspiring and attempting to provide material support to Hamas. Prosecutors also charged 22-year-old Benjamin Teeter of Hampstead, N.C. According to the criminal […]