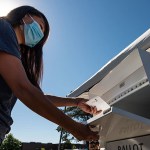 By Brian Bakst, Minnesota Public Radio News The Minnesota Supreme Court is expected to rule quickly in a case that determines how much assistance voters can get with their ballots after arguments Thursday over the goals of easing voting and discouraging election mischief. In a virtually held oral argument, justices pressed Democratic and Republican attorneys […]

Minnesota officials ask families to get tested every 2 weeks