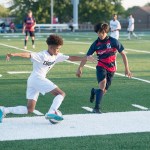 The Albert Lea boys’ soccer team opened its season Tuesday night hosting Mankato East at Jim Gustafson Field. While the Tigers gave up an early goal, defensively they found their footing and held strong against the Cougars throughout the rest of the game. However, the offense was not able to find its rhythm as the […]