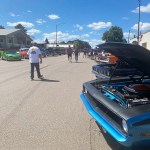 Car enthusiasts came out to Glenville Saturday for a car show as part of Glenville Days. In addition to the car show there was a parade, a king and queen contest and other activities.

The post Celebrating Glenville over the weekend appeared first on Albert Lea Tribune.