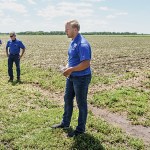 In June of this year, Northern Country Co-op held a ribbon cutting for a new grain bin it was building that would substantially up the Lansing facilities storage capacity. At the same time, it gave them a chance to talk about an innovative project just on the edge of Lansing that will hopefully pave the […]

The post Research plot hopes to pave the way for a sustainable future appeared first on Albert Lea Tribune.