Home News An electric start to the season 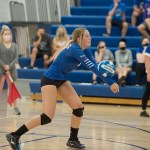 NORTHWOOD — The Northwood-Kensett volleyball team opened its season Tuesday night hosting Riceville. In a back-and-forth matchup in which four of the five sets were decided by two points, the Vikings came out on top 3-2. The Vikings trailed for the majority of the first set until they battled back to a tie late in […]

The post An electric start to the season appeared first on Albert Lea Tribune.