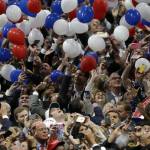 Minnesota’s delegation to the Republican National Convention four years ago wasn’t exactly a Donald Trump fan club, delivering more of its votes to rivals of the eventual nominee.