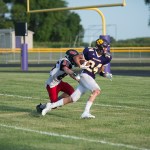 LAKE MILLS — The Lake Mills football team hosted Garner-Hayfield-Ventura Friday night in a preseason scrimmage to get some reps in before the start of the regular season.  The two teams took turns alternating between offense and defense for 10 plays each. Two drives for each team started at midfield and the third drive was […]