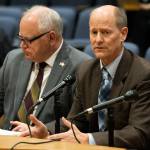 By Tim Pugmire, Minnesota Public Radio News In a slap to DFL Gov. Tim Walz, the Republican-controlled Senate voted 34 to 32 Wednesday to reject the confirmation of Department of Labor and Industry Commissioner Nancy Leppink — meaning she is out of a job. Republican Senate Majority Leader Paul Gazelka said Leppink, who had led […]