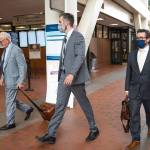 Authorities in Hennepin County are investigating how officer body camera video of George Floyd’s final moments was leaked to a British tabloid after the newspaper published the footage on its website Monday.