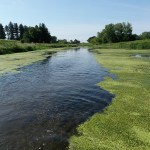 Two reports by the Minnesota Pollution Control Agency and its partners are calling for significant decreases in nutrient pollution in lakes and streams in the Shell Rock River Watershed District to better support fish and recreation. The reports call for strategies including expanding cropland practices, reduction in phosphorus from the city of Albert Lea’s wastewater […]