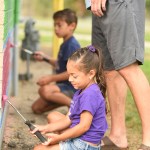 Volunteers painted a new mural on the Lakeview Park warming house on Saturday as part of what organizers are hoping will be the first of several public art works in the community. Holly Karsjens, executive director of the Albert Lea Convention and Visitors Bureau and leader of the Main Street program in Albert Lea, said […]