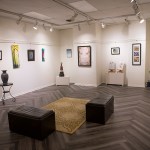 The Freeborn County Arts Initiative has opened its first exhibition since the COVID-19 pandemic broke out. Entitled “In the Garden,” the show is meant to be “a lighthearted escape from worries and cares,” according to a press release. “It’s other people’s ideas of what it’s like to be in paradise or in the garden,” said […]