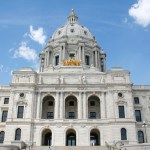 ST. PAUL — The Minnesota Legislature passed a package of police accountability measures early Tuesday that includes a ban on neck restraints like the one that was used on George Floyd before his death in Minneapolis. The sweeping package was said to be one of the most substantial changes to the state’s criminal justice system in […]