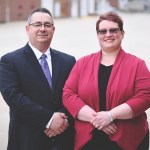 WELLS — Owners of Bruss-Heitner Funeral Home in Wells since 2008, Susan and Nathan Nasinec have recently started plans for a new building that will be in the Wells Business Park on Minnesota Highway 22. Susan Nasinec, also the funeral home’s president and a licensed mortician, said the move to a new building was set […]