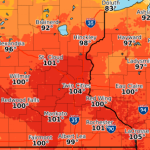 Much of south-central Minnesota will be under a heat advisory Wednesday as heat index values near 100 are expected. The advisory is in effect from 11 a.m. to 8 p.m. Wednesday, including the cities of Waseca, Owatonna, Fairmont, Blue Earth and Albert Lea, according to the National Weather Service. Heat indices are expected to reach […]