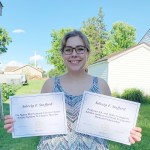 The Gustavus Adolphus Honors Day presentation awarded Solveig Stafford, who completed her sophomore year at Gustavus Adolphus College this spring, with the Professor J.A. and Hilda Youngquist, Adeline Andreen and Ruth Youngquist Memorial Scholarship, which is an endowed scholarship given to an outstanding classics major as nominated by the faculty, according to a press release.  […]